In June 2017, PAEDS investigators, nurses and key stakeholders came together in Melbourne to discuss and present their work from the past 10 years in an anniversary showcase. PAEDS focuses on vaccine-preventable diseases and serious childhood conditions of public health importance including acute flaccid paralysis, intussusception, pertussis, varicella, febrile seizures, encephalitis, influenza and, most recently, meningococcal disease and group A streptococcal disease. Progress and outcomes from research into these conditions was presented at the showcase. PAEDS has also been awarded a partnership grant with NHMRC, titled “Reducing vaccine preventable diseases in children: using national active hospital-based surveillance to evaluate and improve immunisation program performance”. This project is aimed at improving immunisation programs to prevent childhood illness and death due to influenza and pertussis, as well as promoting effectiveness and equity in our immunisation programs for these diseases.

Congratulations to PAEDS on their 10-year milestone and the many wonderful achievements accomplished so far. 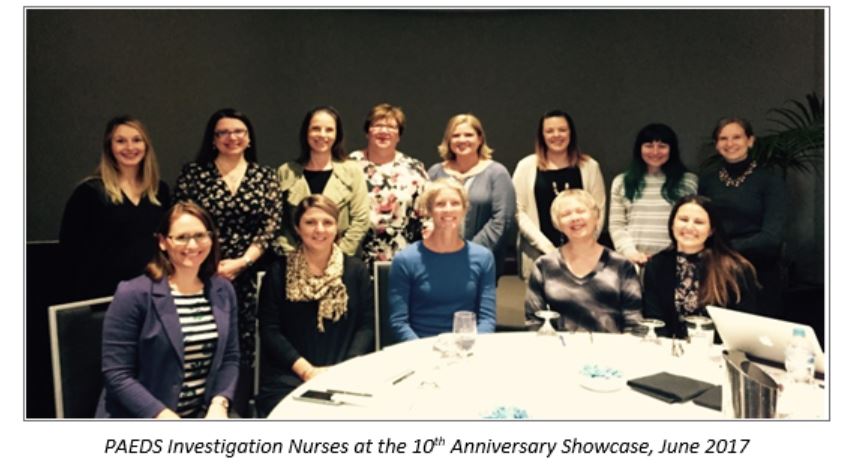 AusVaxSafety is a national, collaborative active vaccine safety surveillance initiative led by National Centre for Immunisation Research and Surveillance (NCIRS) and funded by the Australian Government Department of Health. Vaccines prevent millions of deaths worldwide each year and have dramatically reduced deaths and disability from infectious diseases in Australia. While we continue to receive these benefits through immunisation programs, it is vital that we monitor vaccines to ensure continuing safety and to maintain public confidence in immunisation.

During 2017, AusVaxSafety surveillance has been conducted for influenza vaccine in all ages, as well as pertussis-containing booster vaccines in children aged 12 months to 7 years and shingles vaccine in adults aged 65 and over. Our monitoring has shown that these monitored vaccines continue to be very safe. On average, less than 10 per cent of vaccinated individuals reported experiencing any side effects after vaccination. In those who have reported potential reactions, they were mostly mild and short-lived.

This data is reported to the Australian Government Department of Health Immunisation Branch and the Therapeutic Goods Administration (TGA), and shared with participating state and territory health departments, ensuring any issues are identified and resolved as quickly as possible.

Also in this section...